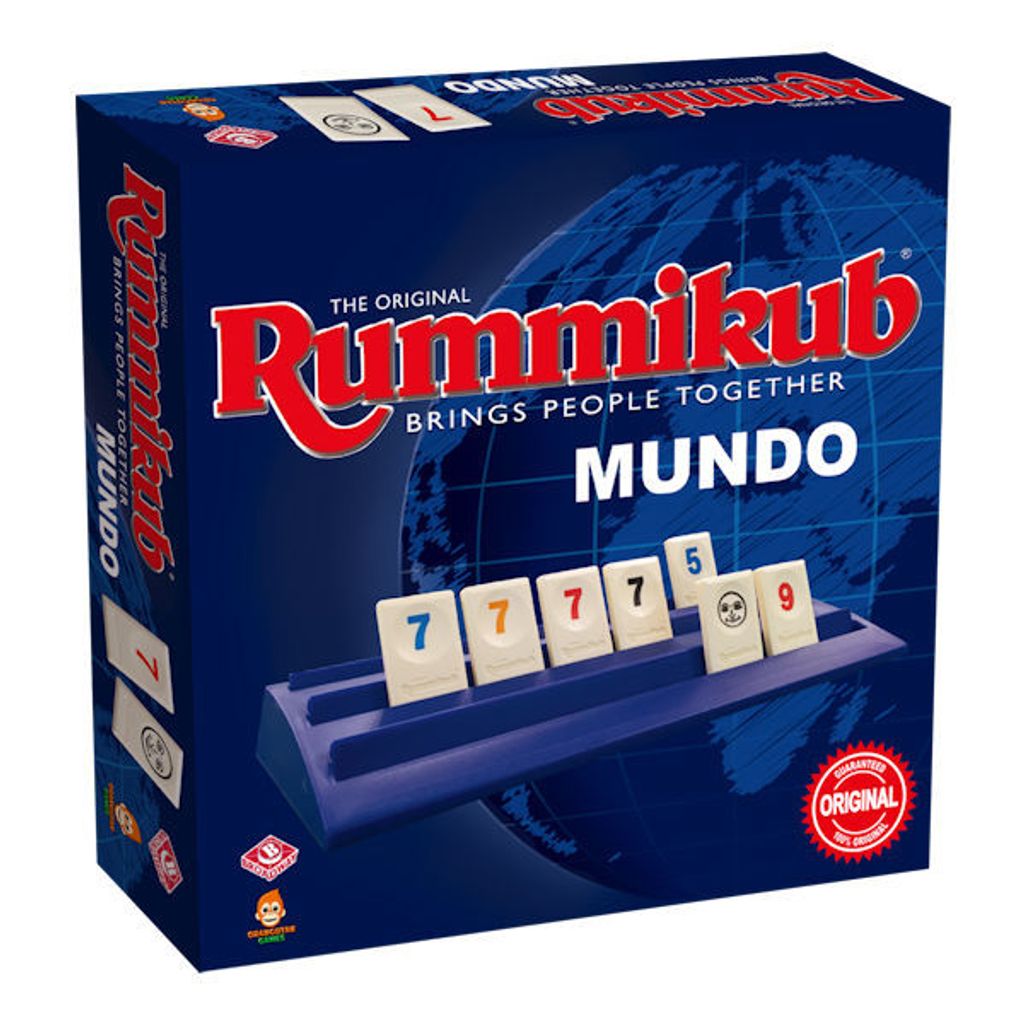 Rummikub is a tile-based game for 2 to 4 players, combining elements of the card game rummy and mahjong. There are 104 number tiles in the game (valued 1 to 13 in four different colors, two copies of each) and two jokers. Players have 14 tiles initially and take turns putting down tiles from their racks into sets (groups or runs) of at least three, drawing a tile if they cannot play. An important feature of the game is that players can work with the tiles that have already been played.

English:
With brilliant simplicity, Rummikub provides hours of amusement, each game as different as the combinations of moves you choose to play!
Players aim to be the first player to go "Rummikub" by using all tiles in "runs" or "groups" and by accumulating the highest score. Outwit your opponents with cool strategy and sharp moves. Be the first to lay down all your tiles and go "Rummikub!". Use joker with caution... He can fire up the game, but if the is smiling on  your rack at the end of the round, you lose 30 points!

Looking for Rummikub Board Game Online in Malaysia? Read This

The Rummikub is an indoor game that can be played by 2-4 people at once. Rummikub is similar to rummy and mahjong, or perhaps a mix of both.

The game is tile-based, and the original Rummikub box comes with a total of 106 tiles in it.

These tiles can be further divided into four different coloured sets of thirteen, with two copies, as well as two jokers. Players start with around 14-16 tiles at the beginning.

The main objective is to use all tiles that a player has. The first one to do so gets the win.

Rummikub: How to Play?

Watch this 6-minute video on how to play Rummikub:

As you can see, the game starts with players drawing 14 tiles usually.

The tiles they draw are faced downwards; thus, the players have no idea of their value. After drawing these tiles, a player makes the first move by bringing forward a certain coloured set of tiles.

The numbers of these tiles must sum up to 30. If the player is unable to bring forward such a specific set of tiles, then they must draw another tile from the original stock.

This repeats until every player manages to bring forward the demand target of other players. Every time they fail to do so, one more tile of unknown value is added to their collection.

General Laws of the Game

The sets in exposure can increase with time as long as every player contributes a tile from their side.

This tile that they bring forward must have a number that continues the set consecutively.

In special cases, a set of the same numbers with different colours can be made by the players too. Other than that, the Rummikub game allows its players to use a special tile known as the Joker tile.

As long as every player is bringing forward at least one tile to contribute to a set, they don’t have to draw more from the pile. A general rule is that if all the tiles get finished from the original pile, then the player with the least value of tiles would be victorious.

Rummikub was created by Ephraim Hertzano in the 1940s. While the year of Rummikub’s origin is unknown, what is known about its beginnings is that Ephraim made several sets of the game and sold them in his neighbourhood.

Slowly the game gained fame, and it made its way to further areas. In around the '70s, Rummikub became one of the bestselling games in the US. With now almost a century old, multiple versions of the game have been released globally. The game of Rummikub is still quite popular to this date.

Buying Rummikub Board Game in Malaysia

You can buy Rummikub in Malaysia from ShiroToys. It is overall an exciting game that lets you get familiar with numbers while keeping you indulged in competition with other players.